My evening routine is to do all the things I need to do in the house after dinner; clean, launder, dust, make more mess, or unglue my butt from the TV couch, then kiss the baby goodnight and get into bed. I’ll spend the next few hours downshifting from 5th to 1st.  If I don’t have to get up again until morning, I’ll be happy.  But, I don’t drift immediately off to sleep.  I’ll read a book if I’m latched on, or watch TV (lately it’s 24/7 MSNBC – I am ADDICTED).  And of course, I’m usually also multi-tasking with my social media.  My current online goal is to be blocked by Drumph on Twitter.

But I digress.  One night I was engrossed in Facebook when Milly came in and asked if she could paint the table in the backyard.  I pictured a little square table that she and her boyfriend like to sit around in the yard.  I said sure.  We talked about what paint she’d use.  Spray paint.  I thought she had found my stash in the back of the garage, (her other room, one with more privacy).  We talked about whether she’d need to sand the table first, but the way I pictured the table, it would always look sort of thrashed even if she sanded it, so I figured she might as well just work with it the way it was.   This was all around 8.

Then, about an hour or two later, at a critical point of the Rachel Maddow Show (I think it was the revelation about Drumph’s first note explaining his firing of James Comey – the one that was rejected) when I thought I smelled paint.  I definitely heard the rattle of whatever those little pellets are that they put in spray paint cans. (Why do they put those in?  Does it help mix the paint better when you shake the can?  I think I just answered my own question.) In the space of 2 seconds, I pictured Milly having brought the small table into the back patio where the 8 person Teak outdoor dining table sits and Milly trying to paint the small table somewhere squeezed into the same old brick patio.  I also pictured the old, beautifully distressed bricks being casually painted, probably in Milly’s favorite color – black. And I’m thinking, she’s doing this now?  I thought she would have done it in the upcoming weekend.  And in that 2nd second, I arrived at the 8 foot slider, opened it and saw that Milly was actually painting the 8 person Teak table.  OHHHHHHHHH, I thought, I didn’t know you were going to paint THAT table.

The table was already 3/4 covered.  My reaction plan, (and I had but 1 second to construct one) involved my considering that she wasn’t really in the wrong because she had said the table in the yard, but neither of use realized that we were each referring to different tables.  And I never asked her what color she would use.  I quickly wondered if I could learn to love Emerald City green.  And, the deal was really done.  Hard to imagine how much it would cost to have the distressed teak look back.  And truthfully, the table wasn’t really so pretty in its aged and distressed state.  But most importantly, the ship had sailed.  So, I said,

“I didn’t really realize you meant THIS table Milly.” She looked at me, can in hand, and started to say something, but we looked at each other and laughed and realized that we each knew what the other would say and really it was just a haphazard misunderstanding.

She and her boyfriend fell into each other sheepishly, murmuring between themselves in hushed tones with light laughter, and I turned back to restart Rachel Maddow. 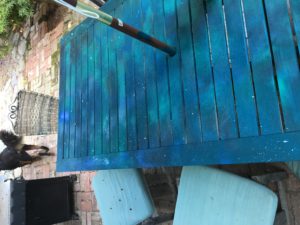 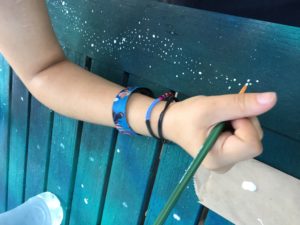 The end result, it’s spectacular.  I have no desire to disapprove or second guess either of us.  It’s a guardian angel moment, really.  It’s a bold act of expression and the unleashing of a gift.  I’m  in love with it.  She sprayed some blue on the green and it looked like a tropical night sky.  And she painted stars in swirls and galaxies and distance.  I’m gobsmacked.

Oh, and her bio Mom (MooMoo was a donor egg but I carried her) is a full fledged imaginative painter pro.

Milly and I both became seniors this year.  I turned 60 in August, and she entered her senior year of high school.  This is more monumental for her than for me.  After 15 years of school, each of them almost worse than the last, Milly will finally be done.  While she’s been blessed to have…… END_OF_DOCUMENT_TOKEN_TO_BE_REPLACED

I just saw the film “Life, Animated.” It was spectacular. It captured the reality that this child faced as a result of his autism. He struggled in ways that no one could understand, until, through his passion for Disney animation, he could reveal his world. It was mind blowing. It made me deeply sad as…… END_OF_DOCUMENT_TOKEN_TO_BE_REPLACED

Be careful what you wish for eh?  Here it is! I have had a Guardian Angel smoothing my way, stepping up and somehow helping me be in the right place at the right time, and voila.  I’d said to my Creative Ass Kicker back in October or November, “if I’m going to self-publish If You Give…… END_OF_DOCUMENT_TOKEN_TO_BE_REPLACED