I am a bundle of nerves.  My breathing is not right.  Why?  Because the kind of job I wanted materialized and a dream of mine came true.  All in the same freakin week!

First of all, I haven’t worked outside the home for YEARS.  I had a brief stint as a  PT bookkeeper when Dan was sick. I was gratified to be given the opportunity and relieved that I was able to do the job well. But as Dan got sicker and the job needed more time, I had to bring it to a close.  (not to mention the snot nosed bitch who made the environment more toxic than I wanted to be around.)  Since then, I’ve tried to find another part time gig that would pay well, and be satisfying.  I did various things here and there, and kept my brain active, although my wallet stayed light.

About a month ago, I applied for and was offered a part time bookkeeping/accountant job for a small, I’ll call it grass roots, non profit.  I love what they do and I really liked the people, but it was, like a bad boyfriend, geographically undesirable.  And their parking situation was, park in one hour spots and then go move your car.  How is that conducive to productivity?  The worst part about it however was that they had turned a full time job into a half time job to save money.  I saw that as deeply problematic.  It would have been fine if I’d had the time to do a 30 hour job for 20 hours worth of pay, but I really didn’t have the time to do unpaid overtime.  It seemed a recipe for disaster.  I had to say thanks, but no thanks.

And, then, as fate would have it, I came across another job that was only 8-10 hours, for twice the money. Now we’re cooking.  I started the job last Monday and while I’m jittery about it, as I am with ALL new things, I feel utterly confident that I’m capable, and that I’ll really like doing the work. It’s adding and subtracting and keeping track of details. When you break down most jobs, it does boil down to doable elements.  And although I know I seem like the artsy fartsy type, I LOVE to work with numbers.  My Mom passed that trait on to me.  She and I are the ONLY people I know who still balance our checkbooks down to the penny every month.  (ok, sometimes lately I let it slide and just put in a balance adjustment, but for 40 years or more, I was to the penny!)

In the very same week, I found out that I’d been accepted into the one writers retreat that I had set my sights on 3 years prior.  I would be going to world famous Hedgebrook, a writers facility, in the San Juan Islands in Washington, for a whole week where I would stay in a cozy cabin in the woods, write ALL DAY, have classes and work shared and critiqued, and be fed healthy fabulous dinners in the company of other women.  Can you say HEAVEN?

But that’s when the knots started tying up my gut.  It brings into play so many doubts, and soul stirring questions about me, and the rest of my life, and who am I and what do I think I’m capable of.  (I mean, what kind of a writer ends her sentence with “of”?)

So here I sit.  I know that my guardian angel had a small hand in putting these pieces together.  (And no, I’m not crazy and I haven’t actually gone off the deep end, but so many little strings got tied together in just the right way and it brings me great comfort to think that my Dad, or Marta and most likely Dan had a hand in guiding my actions to put me into this miraculous place.)  The job, the retreat, my good fortune.  Even my airfare up to Washington somehow got tweaked.  You see, I booked two $63 fares to Seattle and back. Instead of my fare being $126 when I went to pay, it was only $89.  What happened to the other $37?  But I’m not looking a gift horse in the mouth, I just booked it and figured their mistake, they have to absorb it. Not that I’m breaking Virgin’s back by saving $37, so we’re good.

My future sits just in front of my face now.  And I’m excited and nervous.  After many years of writing essays and articles, and tid bits and a silly little self published book that I’ve sold dozen of copies of, I have a unique and fabulous opportunity to spend that time pouring myself into a large project.  I’ve dreamed of this chance.  And now I have it.  I can only pray and hope that I am worthy of the opportunity.

That’s what happens when you ask the universe.  It sometimes says yes. 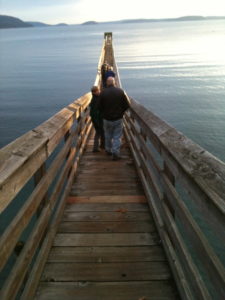 ← This business of love. Oy.
Join me in the horrorful world of online dating →